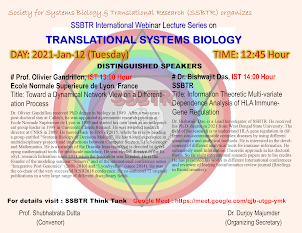 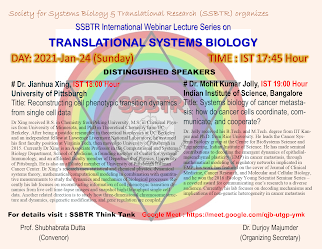 All are cordially invited. For date, time and link and other details aas below:

# Speaker: Prof. Olivier Gandrillon, Ecole Normale Superieure de Lyon at IST 13:00 Hour
Title: Toward a dynamical network view on a differentiation process
Abstract: A recent view emerged that stochastic dynamics governing the switching of cells from one differentiation state to another could be characterized by a peak in gene expression variability at the point of fate commitment. We have tested this hypothesis at the single-cell level by analyzing primary chicken erythroid progenitors through their differentiation process and measuring the expression of selected genes at six sequential time-points after induction of differentiation. In contrast to population-based expression data, single-cell gene expression data revealed a high cell-to-cell variability, which was masked by averaging. Shannon entropy was used as as a measure of the cell-to-cell variability in gene expression. Entropy values showed a significant increase, reaching a peak between 8 and 24 h, before decreasing to significantly lower values. We observed that the previous point of maximum entropy precedes an irreversible commitment to differentiation between 24 and 48 h. In conclusion, when analyzed at the single cell level, the differentiation process looks very different from its classical population average view. New observables (like entropy) can be computed, the behavior of which is fully compatible with the idea that differentiation is not a “simple” program that all cells execute identically but results from the dynamical behavior of the underlying molecular network.
Bio-sketch: Dr. Olivier Gandrillon received PhD degree in biology in 1989. After a two years post-doctoral stay at Caltech, he was appointed a permanent research position at Ecole Normale Supérieure de Lyon in 1989 and started his own team as an independent group leader in 1999 in Université Claude Bernard. He was awarded research director at CNRS in 2009. He moved back to ENS in 2015, where he is now heading a group entitled "Systems Biology of Decision Making". He has a long experience in multidisciplinary projects and interactions between Computer Science, Life Sciences and Mathematics. He is a member of the Dracula Inria team that is devoted to developing mathematical tools for multiscale modeling. He was elected director of the BioSyL research federation since 2011 when the federation was founded. He is the founder of the modeling seminar “Semovi” and of the international conference series “Integrative Post Genomics” (2001-2010) and “LyonSysBio” (since 2014). He was the co-chair of the very successful ICSB2018 conference. He co-authored 72 original publications in a very large range of different disciplinary fields.

# Speaker: Dr. Bishwajit Das, SSBTR at IST 14:00 Hour
Title: Information Theoretic Multivariate Dependence Analysis of HLA Immune-gene Regulation
Abstract: Cell surface expression of Human Leukocytic Antigen (HLA) plays a significant role in immune recognition. HLA molecules are classified into two – class I and class II. In different cancers including leukemia, HLA (both class I and II) down-regulation is frequently reported. Regarding its regulation, different transcription factors (TFs) are responsible for its constitutive expression; however, it is also regulated by several inducible TFs. Using 1st order information theory based analysis for HLA and its associated TFs (human) gene expression data reveals that RFXB, an inducible controlling TF plays a major role in both myeloid and lymphoid types of leukemia; however, in lymphoid leukemia CREB1, another inducible TF may play an important role. Application of MaxEnt based multivariate dependence information theory for higher order analysis confirm the same finding along with an indication of the regulatory role of another combination of two TFs namely CIITA and IRF1 for myeloid type leukmic cells. However through this analysis no alteration is noted for HLA class II gene regulation.
Bio-sketch: Dr. Bishwajit Das, is an Investigator of SSBTR. He received his Ph.D. degree in 2021 from West Bengal State University. The field of his research is to understand HLA gene regulation in different non-communicable complex diseases by using different quantitative and analytical methods. He is interested in the development of different analytical tools for immune-informatics. He extensively used Information Theoretic approach in his doctoral thesis. So far eight international research papers are to his credits. He has presented his works in different International conferences and reviewer of leading bioinformatics review journal (Briefings in Bioinformatics). 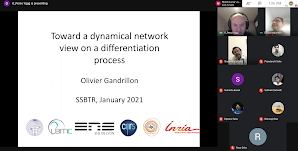 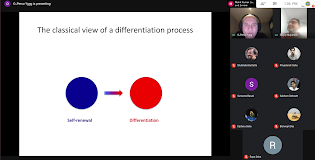 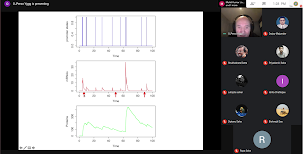 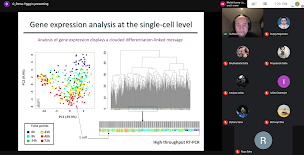 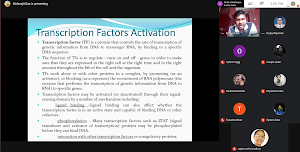 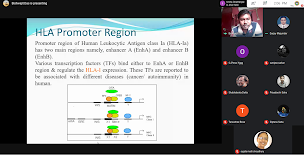 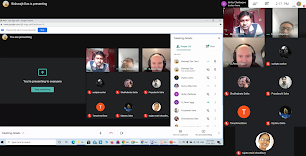 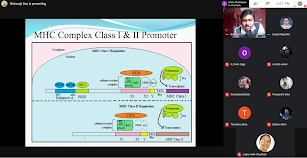 # Speaker: Dr. Jianhua Xing, University of Pittsburgh at IST 18:00 Hour
Title : Reconstructing cell phenotypic transition dynamics from single cell data
Abstract : Recent advances in single-cell techniques catalyze an emerging field of studying how cells convert from one phenotype to another, i.e., cell phenotypic transitions (CPTs). Two grand technical challenges, however, impede further development of the field. Fixed cell-based approaches can provide snapshots of high-dimensional expression profiles but have fundamental limits on revealing temporal information, and fluorescence-based live cell imaging approaches provide temporal information but are technically challenging for multiplex long- term imaging. My lab is tackling these grand challenges from two directions, with the ultimate goal of integrating the two directions to reconstruct the spatial-temporal dynamics of CPTs. In one direction, we developed a live-cell imaging platform that tracks cellular status change in a composite multi-dimensional cell feature space that include cell morphological and texture features readily through fluorescent and transmission light imaging. We applied the framework to study human A549 cells undergoing TGF-β induced epithelial-to-mesenchymal transition (EMT). In another direction, we aim at reconstructing single cell dynamics and governing equations from single cell genomics data. We developed a procedure of learning the analytical form of the vector field F(x) and the equation dx/dt = F(x) in the Reproducing Kernel Hilbert Space. Further differential geometry analysis on the vector field reveals rich information on gene regulations and dynamics of various CPT processes.
Bio-sketch :Dr Xing received B.S. in Chemistry from Peking University, M.S. in Chemical Physics from University of Minnesota, and PhD in Theoretical Chemistry from UC Berkeley. After being a postdoc researcher in theoretical biophysics at UC Berkeley and an independent fellow at Lawrence Livermore National Laboratory, he assumed his first faculty position at Virginia Tech, then moved to University of Pittsburgh in 2015. Currently Dr Xing is an Associate Professor in the Computational and Systems Biology Department, School of Medicine, a founding member of Center for Systems Immunology, and an affiliated faculty member of Department of Physics, University of Pittsburgh. He is also an affiliated member of University of Pittsburgh Hillman Cancer Center. Dr Xing’s research uses statistical and chemical physics, dynamical systems theory, mathematical/computational modeling in combination with quantitative measurements to study the dynamics and mechanics of biological processes. Recently his lab focuses on reconstructing information of cell phenotypic transition dynamics from live cell time-lapse images and snapshot high-throughput single cell data. Another related direction is to study how three-dimensional chromosome structure and dynamics, epigenetic modification, and gene regulation are coupled.

# Speaker: Dr. Mohit Kumar Jolly, Indian Institute of Science, Bangalore at IST 19:00 Hour
Title : Systems biology of cancer metastasis: how do cancer cells coordinate, communicate, and cooperate?
Abstract : Metastasis (the spread of cancer cells from one organ to another) and therapy resistance cause above 90% of all cancer-related deaths. Despite extensive ongoing efforts in cancer genomics, no unique genetic or mutational signature has emerged for metastasis. However, a hallmark that has been observed in metastasis is adaptability or phenotypic plasticity – the ability of a cell to reversibly switch among different phenotypes in response to various internal or external stimuli. Phenotypic plasticity has also been recently implicated in enabling the emergence of resistance for many cancers across multiple therapies. However, a mechanistic understanding of these processes from a dynamical systems perspective remains incomplete. This talk will describe how mechanism-based mathematical models for phenotypic plasticity can enable our improved understanding of cellular decision-making at individual and population levels from these perspectives: a) Multistability (how many cell states exist en route?), b) Reversibility (do cells come across a ‘tipping point’ at specific time and/or dose of inducers beyond which they do not revert?), and c) Cell-cell communication (how do cells affect tendency of their neighbors to exhibit plasticity?). Collectively, our work highlights how an iterative crosstalk between mathematical modeling and experiments can both generate novel insights into the emergent nonlinear dynamics of cellular transitions and uncover previously unknown accelerators of metastasis and therapy resistance.
Bio-sketch : Dr. Mohit Kumar Jolly received his B.Tech. and M.Tech. degree in Bio-engineering from IIT Kanpur and Ph.D. in Bio-engineering from Rice University He leads the Cancer Systems Biology group at the Centre for BioSystems Science and Engineering, Indian Institute of Science. He has made seminal contributions to decoding the emergent dynamics of epithelial-mesenchymal plasticity (EMP) in cancer metastasis, through mathematical modeling of regulatory networks implicated in EMP; his work has featured on the cover of Journal of Clinical Medicine, Cancer Research, and Molecular and Cellular Biology, and he won the 2016 iBiology Young Scientist Seminar Series – a coveted award for communicating one’s research to a diverse audience. Currently, his lab focuses on decoding mechanisms and implications of non-genetic heterogeneity in cancer metastasis and therapy resistance, with specific focus on mechanism-based and data-based mathematical modeling in close collaboration with experimental cancer biologists and clinicians. He is an elected fellow of Indian National Young Academy of Sciences (INYAS), and serves as Secretary of The International Epithelial-Mesenchymal Transition Association (TEMTIA). 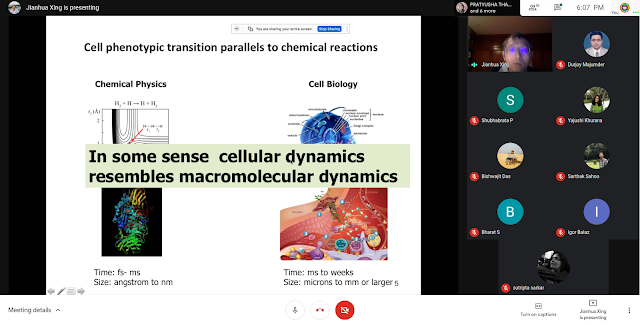 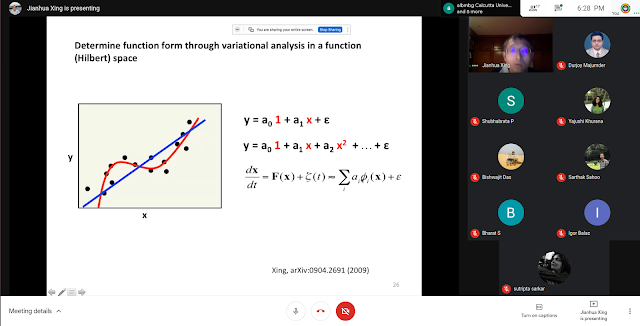 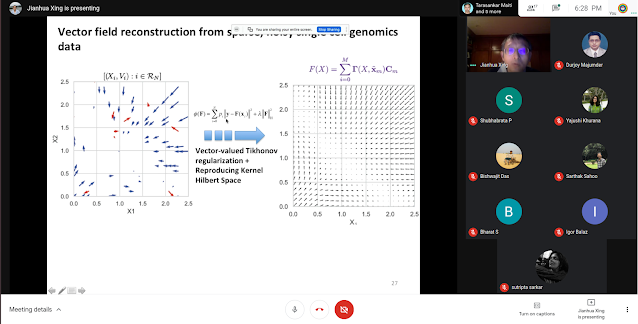 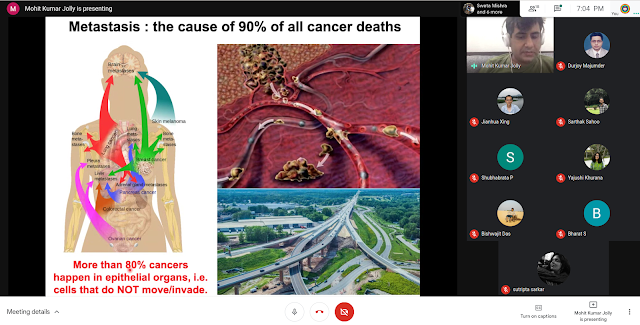 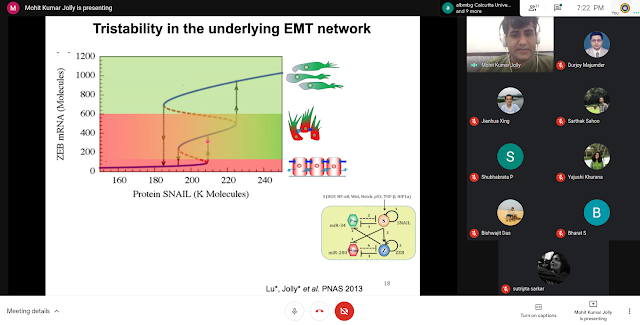 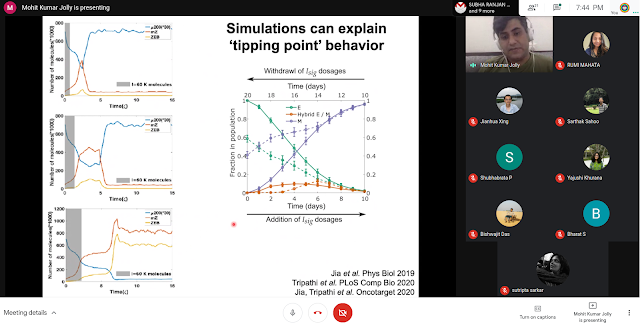